A black box is a small, ominous-looking box that were actually highly-advanced data storage devices created by The Engineer for Percy that contains many different pieces of government information, and also information not known by the government but only by Percy.

It was mentioned for the first time in Pilot by Michael although not as Black Boxes, just as files that Percy can use against government in case of his fall.

Seemingly containing an impressive amount of database, a black box can contain anything from details on Division missions, operations carried out in Division, technology acquired and utilized by the organization, to information on recruits. Information like these are very controversial, and could potentially lead to a world war if openly exposed to the public. The information inside these black boxes are what Percy uses to blackmail the people who put him in power in case they ever attempt to stab him in the back.

As they are potentially very destructive, each black box is guarded by a "Guardian", who is usually a highly-trained and skilled Division agent, and it is usually locked in a bank safe near where that agent is based. Black boxes also require a blood sample from its assigned Guardian so that it is not accessible by all.

There have been seven created, and Birkhoff humorously refers to them as Percy's "horcruxes." Nikita seeks to track down and destroy them all so that Percy will lack leverage against the government before taking him down. However, if Percy is killed, then all the Guardians would release the contents of the black boxes to the public, thus causing unimaginable chaos. It was revealed that he has a chip implanted  that monitors his vitals: if he ever were to flatline, the information from these Black Boxes would then be automatically released into the public.

The last of them was destroyed in "High-Value Target." 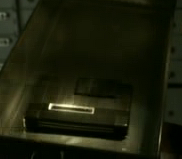 The destruction
Community content is available under CC-BY-SA unless otherwise noted.
Advertisement