This was a double of The Real Helen Collins who worked for The Invisible Hand.

The Invisible Hand created a decoy of Amanda in Pay-Off. She killed everyone in the control room within The Shop's compound . She was going to launch a nuclear attack on US targets using Pakistani missiles, thus starting World War III, she was killed by a missile attack on the compound by order of Nikita when it turned out she was beyond reasoning. She died in the blast. It was later revealed the real Amanda was alive. 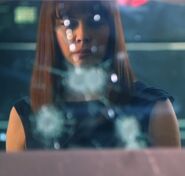 Face to face with Nikita

The 'Death' of Amanda.
Add a photo to this gallery

Retrieved from "https://nikita2010.fandom.com/wiki/Helen_Collins_(Double)?oldid=21442"
Community content is available under CC-BY-SA unless otherwise noted.